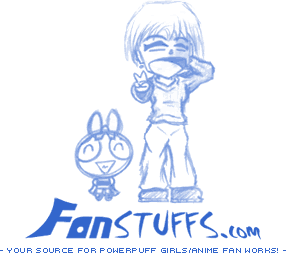 FanStuffs.com was a fan-works upload & showcase website, tailor-made for fan-artists and writers of the acclaimed animated TV series, The Powerpuff Girls.

Launched in mid-2001 during the height of the original series' popularity and rapid PPG fan-community growth, the site's user-base reached nearly 600 artists and featured over 2,500 pieces of artwork, written fiction and web comics. Eventually, standalone anime arts were also permitted, appealing to artists' related interest in the fandom.

After nearly five years on the web, FanStuffs.com closed its doors February of 2006, in part due to all-purpose artwork hubs such as DeviantART becoming more popular; but mostly on account of real-life getting in the way of timely updates, as is often the fate of many one-person-operated fan sites.

Back to the present... while stumbling through some old backups, I decided to throw this page up in a good ol' fit of nostalgia. Then I rode that wave and cued up some classic PPG DVDs... it still holds up!

A gigantic shout out and thank you to each and every artist, writer and friend of the site who kindly contributed their time and talents toward giving us a modest dose of success within our small corner of the Internet. I sincerely hope you enjoyed using the site as much as I enjoyed making it. :D